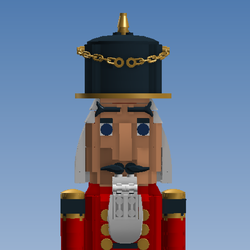 This project is a 1:75 scale model of a Martin JRM-3 Mars firefighting water bomber.

The Martin Mars was originally ordered by the US Navy during World War II.  It was one of the largest aircraft involved in the war, and was used briefly during 1945 to shuttle troops and equipment from mainland USA to Hawaii and other Pacific islands.  With a payload of approximately 30 tons, it could carry 133 troops or 7 Willys MB Jeeps.  In 1949, one of the Mars aircraft, the Caroline Mars, set a world record by carrying 269 passengers.

In the mid 1950s, the Navy had decided to scrap all of the Mars aircraft, but the Forest Industries Flying Tankers conglomerate based in BC, Canada (now Coulson Flying Tankers) rescued them and converted them to firefighting water bombers.  The conversion included a 7,200-gallon (27,250-liter) internal water tank and a pair of retractable scoops.  These scoops enable the Mars aircraft to skim the surface of a body of water and fill the internal tank in just 22 seconds.

The Mars aircraft were instrumental in containing several large forest fires, including the California wildfires of 2007 and the Okanagan Moutain Park fire in BC, Canada in 2003.  Although Flying Tankers lost its contract with British Columbia in 2013, there is still one Mars in active status.

The US Navy had placed an initial order for 20 Mars aircraft in 1942, but only 7 Mars aircraft were ever built, including the prototype, with the first being delivered in June 1945.  There were few enough of them that each was given a unique name, e.g. Phillippine Mars or Marshall Mars.

More pictures can be found on my Flickr page.