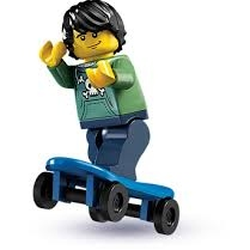 This Lego model is based on the TV series and movie, Battle Star Galactica. The humans, on another planet, are attacked by evil robots. Most of the humans' space fleet are deysroyed, except for the Galactica. That ship takes all of the survivors, and heads to the lost planet Earth. this fighter was used against enemy (the robots) fighters.