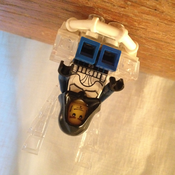 This is a MOC that I started building about a year ago. I wanted to build some sort of vehicle similar to a snow-mobile, but could drive over ice. This model started off very different than this, but there was always something I was not happy with so I kept updating it. A few months ago I completed the final update, this being the finished product.

The Freeze Fighter is a weaponized vehicle for cold terrain. Each firearm it is equipped with has a specific purpose. The orange tipped shooters on the front sides of the vehicle are used for melting ice and snow in its path. The silver tipped missiles on the lower sides freeze any object they come in contact with once fired. Lastly, the 6 barreled cannon mounted on the side shoots chunks of ice at anything against its driver wishes keep out of his path. The fighter also has an ejector seat for emergencies. The ejector seat may be triggered by pushing on the back wheels.

I have considered that the mini-figure included has a licensed torso print, but I know that another similar  may be used or made. I do not think there are any illegal techniques or connections used in this model except maybe the way the treads on the back are in place. Overall, I really enjoyed building this model and playing with this model and hope that others may too! Thanks for giving my model a look and I hope you will support it!