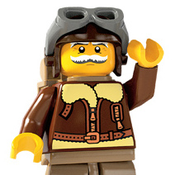 By Tech-constructor
16 comments
The Barcelona Tower is a telecommunications tower located in the city of Barcelona, the Catalonia region capital in Spain. The construction was designed by the architect Sir Norman Foster and it was built for the 1992 Summer Olympics. It has a singular design using guy wires for lateral support as it was a gigantic mast. The height reaches 288.4 m (946 ft). The real building has 13 floors and the floor number 10 is designed as a public lookout point over the city. An awesome panoramic lift is used to transport the users from the base to the floors.
In order to avoid a brick overflow some licenses are taken. The number of floors are reduced in the MOC and the underground installations are not represented.
The set is made with a mix of stud and technic bricks in order to get a realistic and affordable construction.
I hope it would be the starting point of a world towers collection that LEGO fans would appreciate.