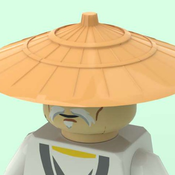 By TheNewBug
10 comments
In this set, Sensei Wu jumps up, kicks back, whips around and...
Sits.
I have included Sensei Wu, A seat for him, And the memorial itself.
I have given Wu a skin-tone that has not yet been introduced to LEGO Ninjago.
The memorial building has two (2) bricks (one small, one large), each the color of one of the ninjas (excluding Lloyd, who only has one, in the center/top of the memorial).
Wu not only has a lawn-chair, but he also has a small patch of grass to stand in.
The set has total sixty-seven (67) pieces, but every little piece counts in this set.