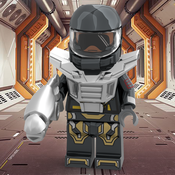 The U.N.S Exploration Submarine "Atlantic XVI" (where U.N.S stands for "United Nations Submarine") is an imaginary exploration submarine developed by the main U.N Members for the deep-sea exploration of the oceans with new and advanced technologies. With a length between 270 and 280 cm (between 106,3 and 110,24 in), it can reach the 50-60 knots (kn).

We need to produce more submarines like this. But HOW can we do it? Of course, there is only a way! We need to support this LEGO Set and reach each number of supporters. Every support will be equivalent to a given amount of submarines produced.

A huge thank you goes to the LEGO Ideas Community for the support received. It means that I made a good work and that people are appreciating it. Keep supporting this project and we'll be able to produce more submarines, allowing the Scientific world to give us a greater and more extended knowledge of the oceans!