Captain SEISMIC and the SEISMOTRON 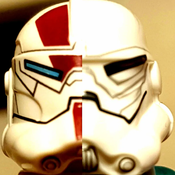 By Luke Solo
19 comments
What is The SEISMOTRON?
The SEISMOTRON is a spaceship. A spaceship that can travel the galaxy. When it reaches a planet's atmosphere, it can travel either as a plane or as a wheeled vehicle on dry land. Not only that but Captain SEISMIC can also travel in style in a detachable boat shaped pod when wanting to travel oceans, rivers or lakes.
Who is Captain SEISMIC?
Captain SEISMIC loves looking for adventure, but also to assist those less fortunate and who need help. As well as all that, Captain SEISMIC enjoys painting things with their paint blaster. It's why they have a purple splurge of paint on their overalls. They even have a crate of different coloured paints for their blaster stored on their detachable boat shaped pod, underneath the cockpit. They love being asked to paint fellow travellers vehicles.
Key features of The SEISMOTRON:
The letter "S" is emblazoned at the front of the vessel and on the wings, which lets everyone know SEISMIC and The SEISMOTRON have arrived! On the back of the craft sits the Space Globule Modulator that pumps out communications from Captain SEISMIC. At the front, lies the Neon Radar; a device that seeks potential clients for Captain SEISMIC and then sends this information to the Space Globule Modulator. Captain SEISMIC controls the SEISMOTRON from the ship's central cockpit and can keep their paint blaster in the front compartment of the cockpit.
Why did I build The SEISMOTRON?
I built this craft because I've always loved building spaceships, planes, boats and cars and I believe the galaxy needed a space/planet ranger! I also love mixing bright coloured bricks with darker coloured ones. This would make a great set as it's fun to build, fun to look at, provokes imaginative play and the mini figure can sit/stand in either the cockpit or the detachable pod. It also has moving parts; the cockpit windows, detachable pod, Neon Radar (turns left or right) and Space Globule Modulator (rotates on an axle and moves up or down on a hinge). This set is aimed at 6 to 10-year-olds.
All ideas expressed here are the original concepts devised by me; Luke Solo (LEGO Ideas Designer/Username). 2021.