The Nightmare Before Christmas Project 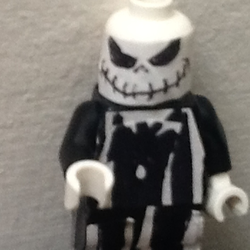 The Nightmare Before Christmas Project

In 1993, one of the most iconic movies was introduced. It was called the Nightmare Before Christmas and it was filmed in stopmotion. I did not care for those type of movies, but I decided to go see it since it was a Halloween movie after all. When I came out of the theater, I remembered seeing a wonderful movie with a sense of hilarity and heart. It was all compiled so greatly, and so memorable. Years later, I started collecting LEGOs and they were very fun to me as well. LEGO sets are really fun, but I enjoy the individual building because I can build whatever I want. I stumbled upon LEGO CUUSOO and discovered that you could actually upload your builds and they could actually become a LEGO set! I thought and thought about something I could build. Then, it hit me. "Nightmare Before Christmas!" My favorite movie would be a perfect LEGO set! To me, one of the iconic parts was the Town Hall scene in which Jack introduces Christmas to the quirky citizens of Halloweentown. That was what I saw in my head and built.

The Town Hall from the Nightmare Before Christmas would make a perfect LEGO set because it's iconic, flashy and memorable. This Town Hall follows the same architecture, along with a large clock and gothic gates that open and close. The front of this set features a "Count-down Calendar" which is what the citizens use to keep track of their upcoming holiday. Inside the set, there is a podium where our skeleton protagonist can talk about Christmas and there is one row of benches so the audience can watch in awe. A light brick is included to re-enact the brief moment when the Mayor shined a spotlight on Jack in the movie. A torch and a pumpkin are placed inside the set, as well. I included minifigures JACK SKELLINGTON and THE MAYOR, because I felt that they stood out in this particular scene from the movie. This project needs 10,000 supporters if it is going to be a product. Please support this project. Don't forget to share it with Nightmare Before Christmas fans and spread the word!