Hammerhead Shark On A Mech 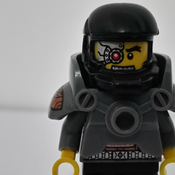 What if a hammer head shark found a robot suit and knew how to use it? Will it use it for good? Or will it unleash choas on the world? At the beginning I wanted to build a robot suit for my Lex Luther minifigure but an idea sparked in my head of a cyborg shark in a robot suit, so I decided to do this instead. It turned out better than I expected. The shark can be removed from the robot suit easily. The arms and legs are ball and socket joints so they can move in many directions, and the claws open and close to grip on things.