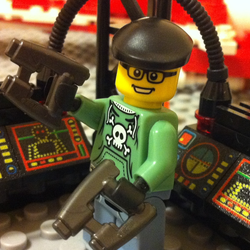 For your consideration, I present to you the LL 939 Sub-orbital Interceptor. This is a multi-purpose space craft with an array of sensors and armaments allowing it to perform a variety of missions, to include reconnaissance, escort duty, planetary defense, and the intercept of unknown, questionable, or hostile (alien?) craft. The craft holds one pilot in a spacious cockpit, which contains multiple computer screens and heads up displays. I chose the red & white color scheme as this is something that has not been done in previous classic space sets (as I recall) and I love Galaga (ha-ha). The set could potentially include 2x ships in reverse colors. If I had the bricks, I would have also tried this in black & yellow, like the 'Tiger Squadron' fighters on Star Blazers. I think that would look very cool.

The idea is for the ship only, not the base plate or other mini-figures in the display. Lego’s selection and production of Pete’s Exo-Suit (brilliant!) has opened the doors for the potential of future classic space sets, so here is one of my efforts. I hope you enjoy! Thank you.