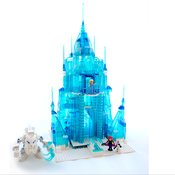 Hello,
Welcome to my Lego Ideas project submission of Disney's Frozen: Elsa's Ice Palace! My family and I are extreme Lego fans and when the Lego Disney Princess line of new sets that came out this past January were released, the first question my daughter had was "Do they have a Frozen set with Elsa?". We quickly discovered to our surprise that Lego did not create one although I had to buy every single Disney Princess set that they did make for my daughter because they were awesome! As a couple weeks went by, I really felt that this was a missed opportunity by Lego and I really wanted to make my daughter's favorite part of the whole movie-The Ice Palace! I knew I couldn't cut corners, chince or go half way on this...it had to be awesome. 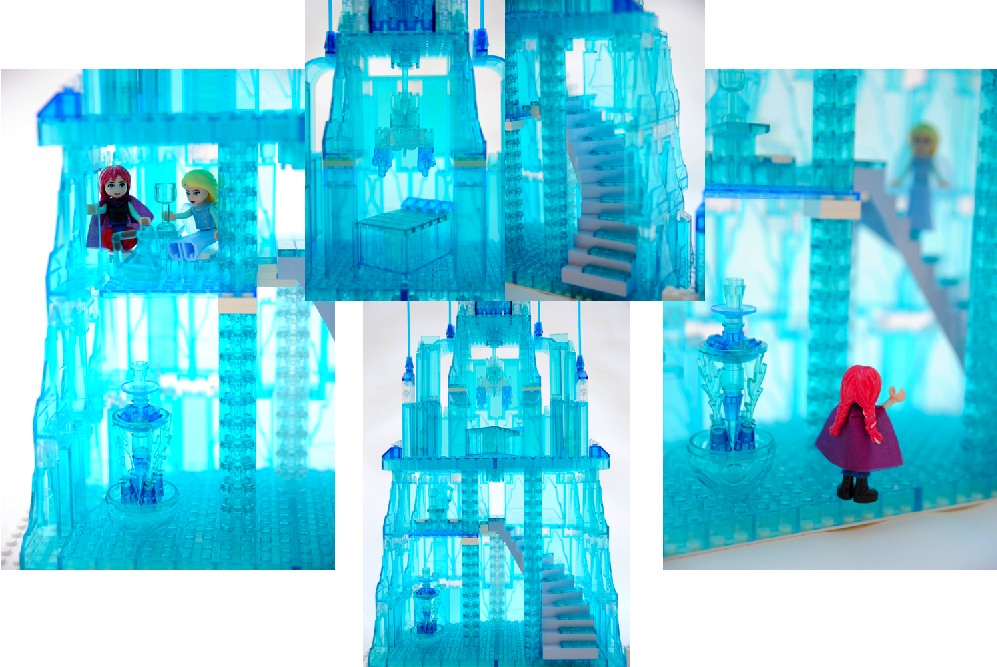 I first started researching parts and colors to see if I could do justice to such an awesome structure with only Lego parts as a medium. After a lot of searching and learning new things about lego colors and parts, I felt I could move forward but it was not going to be easy. I found a lot of pieces I would need, came from some older sets from a few years ago and some new ones as well. It was one of the most fun, educational and fulfilling experiences I've ever had in my life. 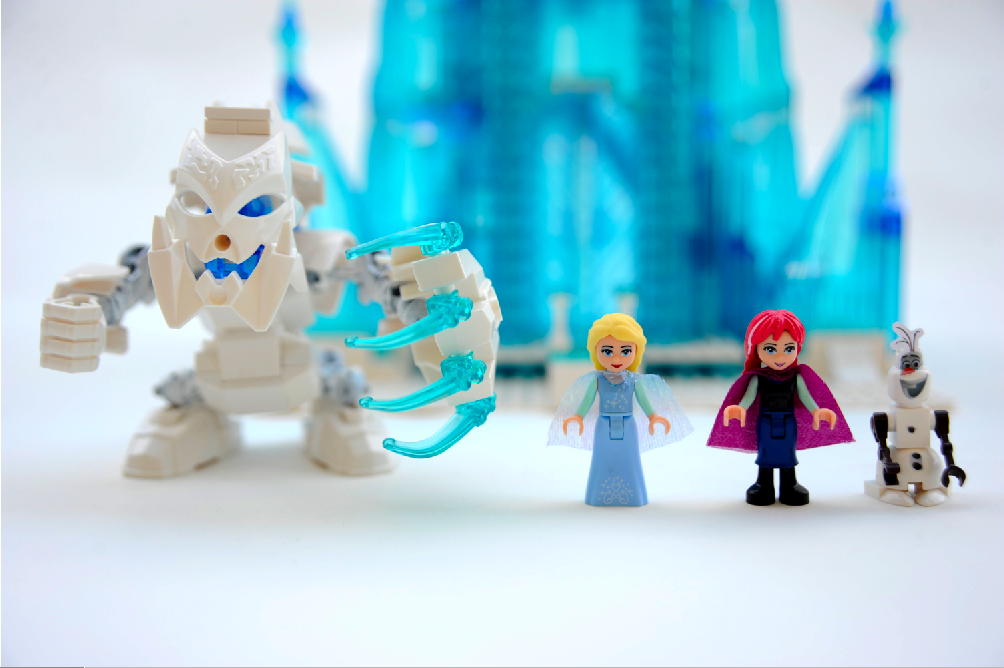 This is intended to fill a big void out there in what I feel is lacking a bit-the larger set/collectible girl Lego market. Let's face it though, both my boys and millions around the globe want an Ice Palace too! If Lego were to start producing some of these molds in mass again and change some of the colors of current pieces and/or accessories, I believe this set could easily be made at an affordable price point while still obtaining profit for Lego. There isn't a single piece I used that was not Lego made. Only things I made myself were Elsa's and Anna's capes. Only modifications I made were to paint the Lego Hero Factory joints white for the snow monster, paint Anna's hair with white stripe, as well as her shirt and skirt. I'm not good with decal-making so I did cut out some eyes, a nose and decal hair and placed them all on a pure lego Olaf. That's it! All Lego! I tried making it as accurate to the movie as possible with some neat little surprises such as spiral staircase, chandelier, back doorway and staircase, ice bed, ice fountain and ice goblet & pitcher! It even has the balcony where Elsa can go sing her now unforgettable song that is repeated by little girls and boys everywhere I go..."Let it go!" 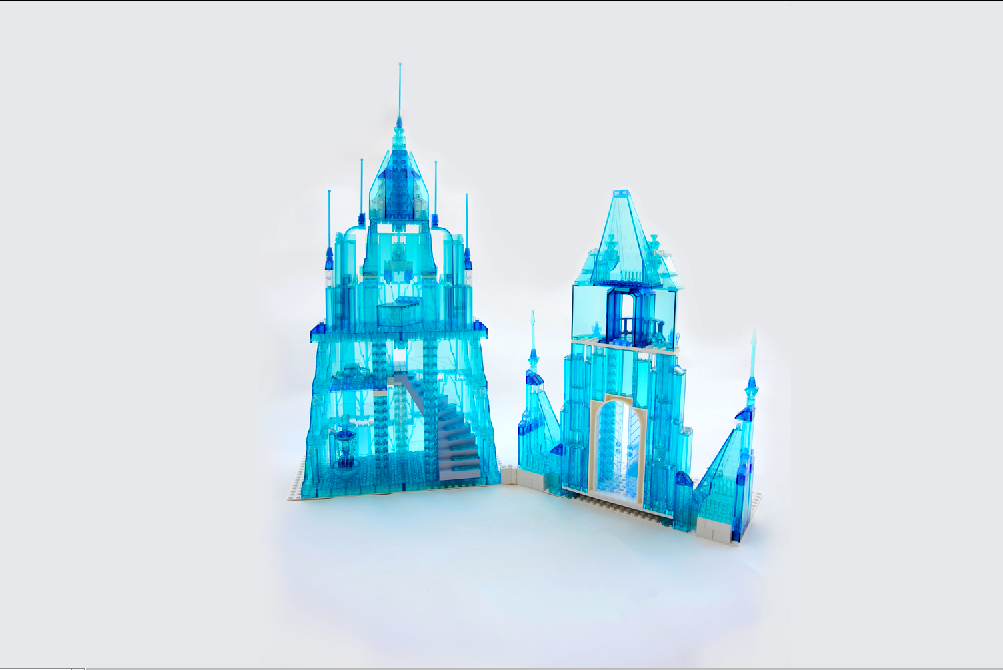 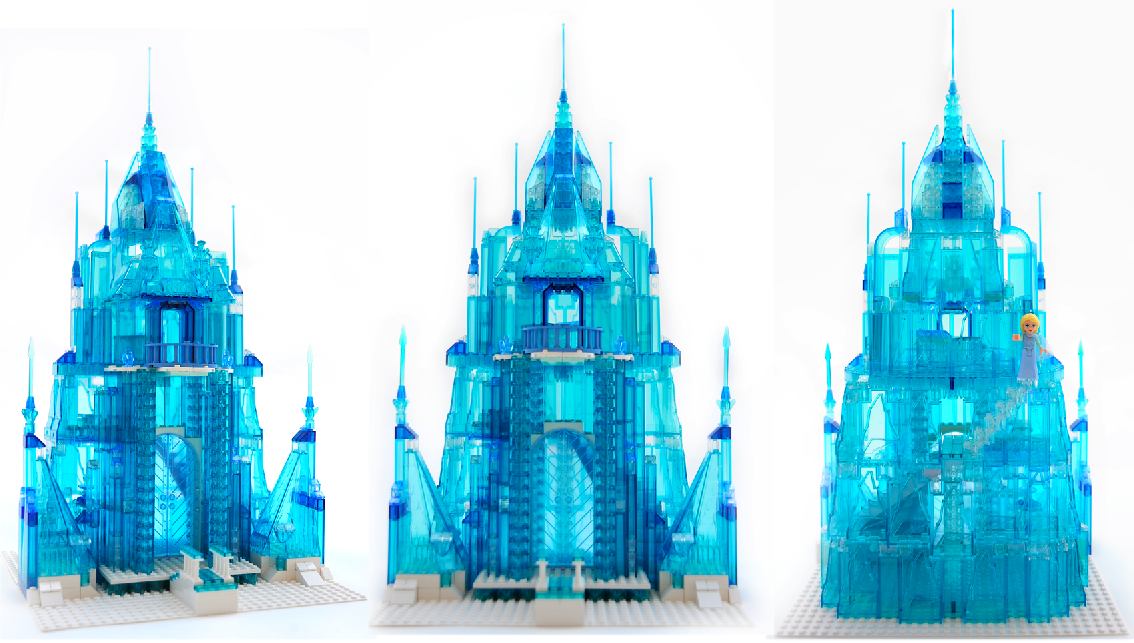 Thank you for visiting my project page and if you like this project, then please sign up for a Cuusoo account and vote! We need 10,000 votes to make sure Lego takes a serious look at this project to produce it for all children to enjoy and live the magic of Disney's Frozen over and over again! With over $1 billion dollars in global box office sales alone, there's definitely a market for this. One things for sure...my kids love it.

***PROJECT GOAL DEADLINE !***
DUE TO LEGO TRANSITIONING THE CUUSOO PROGRAM OVER TO THE NEW LEGO IDEAS PROGRAM, WE NOW HAVE A DEADLINE OF MAY 1ST, 2015 TO REACH 10,000 SUPPORTS. PLEASE KEEP SHARING THE PROJECT!

****tips for helping to get more votes****
-spread the word
-forward this page via e-mail, facebook sharing, twitter, Google plus, Flikr, Instagram, and Pinterest to everyone you know
-post a link in any social forums you frequent
-tell people about it in your daily trips anywhere you go
-post links to this page in Disney/Frozen and brick building forums

Why didn't you include classic minifigures instead of the Friends-style or "girl figures"?
- A lot of thought went into what the look of this set would be...including the minifigures. While the majority of Lego fans seem to be boys of all ages, it was a decision I made based on two main factors. First, this is something my daughter wanted and even though my boys saw the movie, they didn't think of this idea. They did however, love it in every way as I started designing and making it and even pushed me to include elements I didn't think of. Second reason is that it's seemingly obvious which minifigures Lego themselves would choose given the demographic of the movie's audience and their interests in the already existing Disney Princess license. Bottom line, I'm a Lego fan and a Frozen fan. I'm also a father and I built this palace the way I felt it should be introduced to the world for both girls and boys and if I saw this in any store, not having built my own of course, I wouldn't hesitate to buy two of them-1 for my kids and 1 for display/collecting.

Where's Kristoff and Sven?
- I didn't forget them! I was trying to get the Palace itself completed with quality in mind first and the minifigures/characters were second. I wanted to get a completed project out as soon as possible and always had adding Kristoff and Sven at a later time on my mind, if I could make them according to the standards they deserve. For those that haven't submitted their own projects, I highly recommend reading the terms and guidelines for submissions. Lego does not currently allow submissions with ideas for new molds or pieces of which I truly believe both Kristoff and Sven would need in order to be done right. I researched long and hard for existing Lego hairpieces, animal pieces to make these two awesome characters and came up short every time. Good news is that Lego has the power to create new molds and if they want to make a Frozen Lego set, they ultimately can make a headpiece for a horse to look like Sven or minifigure shoes that are pointed like Kristoff and have all the awesome details and paint added that would make them perfect. The point is to vote for this project either way! If Lego sees that the public has an interest in a Frozen Lego set, then they will make one!

Can you make Olaf look better?
-Again, Lego doesn't allow new piece ideas in Cuusoo submissions. Everything you submit has to be made from existing Lego pieces or just something that they can change color of themselves. I was hesitant to submit my project with Olaf the way I did and literally tried A LOT of different designs for snowmen before deciding on my final version of him. Ultimately I feel Olaf would best be completed by Lego with a new headpiece mold that Lego can create if they obtain the Frozen license. I envision it being something similar to the new Simpsons headpieces or any of the minifigure pieces that fit over standard minifig head pieces and Olaf would be alive. So think of my Olaf as a placeholder until Lego were to make a Frozen set themselves. If I go into photoshop and create the perfect Lego Olaf now, then Lego Cuusoo could very well disqualify my project and the dream of a Lego Frozen set could disappear with it.

This is for girls, why did you make this?
-Hey, hey now...girls love Lego too! This Ice Palace could easily be played with by boys and as a matter of fact, it already is...by my boys. My son may not use the doll figures as much but he uses his own "boy" minifigures to play with his sister and they have a blast. The movie resonates with people of both genders and it's success can attest to that. I know this question may come from the younger male fans but let's open our eyes to the bigger picture of the fact that we're getting a Frozen Ice Palace if this gets past a review with lego Cuusoo...you can always use whichever minifigures you want to play with because that's what Lego is all about!

Love it but why did you do this? Lego will probably make one of their own...
- Well, I made this because my daughter wanted a Lego Frozen Ice Palace, I didn't want her to have to wait, and I didn't want to wait a long time to have something come out in several months or later and not have it look like Elsa's actual Ice Palace. We love Lego in my household. We love what they do for children and the world, but even we know they can't get every design right all the time. I mean it when I say a lot of time and research was spent on piece color, molds, piece availability, cost and price and overall size and design of this set before bringing it to completion. I want this to be done correctly so I took matters into my own hands to hopefully guide Lego in what I felt was the right direction. I know everyone won't agree that my project, the colors used, the overall look,etc is what the definitive version should be and that's ok! I just wanted to get the ball rolling. If Lego releases an Ice Palace from Frozen because they have been working on it already in secret or they simply get it done before my project can reach 10,000 votes... I would still be excited to see what their masters can come up with!

Can I post this project on my (any given webpage, social page,website) site?
-Yes! Please and by all means...thank you!!! All I ask is that you give credit for the project and pictures to Fohzen somewhere on your page along with a link back to the Lego Cuusoo site so viewers can support the project!

Do you have higher resolution photos available for view?
-Yes! I have created a Flikr account under username Fohzen where you can see this project in higher resolutions. There's even a couple more pics that aren't posted here for viewing. Just keep in mind to refer people to this page and not the Flikr page when asking them to support the project!
http://www.flickr.com/photos/118455817@N08/

Can you make other sets?
-This is my first experience with Lego Cuusoo. Thanks to Lego Cuusoo user buggyirk, it has been brought to my attention that I can submit numerous projects at one time! What this means is that I will certainly be brainstorming over the next few weeks/months as my main focus will be promoting Elsa's Ice Palace!

Why did you use so many clear pieces/clear blue pieces of the same color? Why not add some solid colored pieces instead?
-Believe it or not, this model has a total of 6 different colors in it. I tried to remain respectful to Disney's design and look of the Ice Palace from the movie...which is mostly an ice-blue color. There are many scenes in the movie where lighting conditions from the sunsets/sunrises and change in Elsa's mood add some real nice purples, pinks and magenta colors. I did research into some other transparent lego pieces in these colors but none of them seemed to fit the needs of the project or were simply not the right molds for the job. If I can get my hands on some red or purple lit Lego bricks I might be able to test how that looks. We'll see!

Another big congratulations to Frozen for passing the billion dollar box office mark !!!

Congratulations to Frozen for winning the Academy Award for best animated feature film and best song!!!