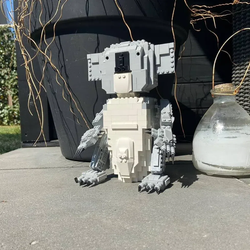 Lex1B
13
50
days left
This is my LEGO Ideas SpongeBob SquarePants set proposal!
The proposal consists of 3 main buildings:
- SpongeBob's house
- Patrick's house
- Squidward's house
The houses feature famous furniture from the show. SpongeBob's house features 3 layers. On the first layer you can find his famous chair, and TV and of course, on the second layer you can find his bed, which appeared in many episodes. At the top of his house, you can find his roof garden, which also appeared in an episode. Squidward's house features 3 main layers. On the first layer, you can find his sofa and his TV. On the layer above is Squidward's painting room, here you can also find his clarinet, and at the top you can find his bathroom. The final house is Patrick's. Patrick's house features only 1 layer. On this layer Patrick can watch Barnacle boy and Mermaid man.
I love SpongeBob and I think that it would be great if SpongeBob made his return in LEGO form. I personally think that the 3 houses would have a lot of playing potential and would also look good on a shelf as decoration.
Thank you for your support!
13
50
days left