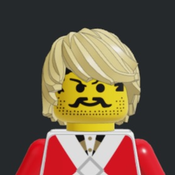 This is an ornamental set designed to celebrate the inspirational success of the film Cool Runnings.

Set includes:
- Minifigures representing the main characters: Derice Bannock, Sanka Coffie, Junior Bevil, Yul Brenner and Irving "Irv" Blitzer
- The iconic bobsleigh
- Three small recreated elements from the film including the mirror and lamp from Junior and Yul’s “I see pride, I see power” scene, the hanging picture of Irving with Derice’s father in Mr Coolidge’s office, Sanka’s lucky egg and the money Junior obtained from selling his father’s car.
- Palm tree and Fir tree, each representing the countries of Jamaica and Canada respectively. These are a gentle nod to the scene in the film which depicts a plane carrying the team taking off in Jamaica and landing in Canada, both airport runways depicting a single tree in the foreground of the scene.
The ‘Cool Runnings’ film logo recreated in colourful Lego bricks.
I grew up watching this film, and after recently re-watching it as an adult I came to appreciate again its true brilliance. As Cool Runnings contains so many memorable lines, great music, likeable characters and scenes, I found myself realising that any Lego set representing this film could be loaded with instantly recognisable features - and a lot colour. Moreover the film embodies the spirit of teamwork, and I was keen to attempt to convey this aspect in the set with all the figures standing side by side.