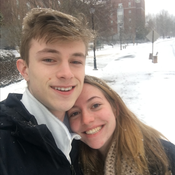 Pac-Man is a game that holds a place in many of our hearts, both the young and the old, and is recognized globally as an outstanding icon. Sense it's release in 1980 Pac-Man has become a part of many cultures, appeared in many mediums, and spread to many consoles. My project seeks to introduce the concept of combing one childhood icon, with another childhood love; Lego.

My name is Ethan. I am a 16 year old boy currently living in the United States. I, like so many others, grew up building and destroying Lego's and to this day I still continue that tradition. Having building with Lego's for a short while, I was reintroduced shortly after the start of my High School career. Entering ninth grade, following a house and school system change, I found myself overwhelmed by the responsibilities that we all face as we mature and grow older. I sought to relieve some of my stress in the time after school and before my evening soccer (football) practice. This relief came in the form of Lego's. It wasn't until the summer of my ninth grade year that I truly began building and destroying once more. Having just gotten my first job as a busboy I started collecting the Simpsons Series 1 figures and displaying them on my desk at home. I was delighted by the joy that I received when opening a pack and seeing the combination of a childhood classic with my most beloved toy. For two years I continued assembling sets and collecting minifigures until one day I happened across the new Lego Ghost Buster's set. I noticed it as I was flipping through a Lego catalog one summers eve. I thought to myself, "What a great idea." I took note of the "Ideas" symbol printed on the box and I was suddenly curious to find out just as to what that meant. After looking it up online I found the Lego Ideas website and immediately I knew I one day wanted to have an idea worthy of being a Lego set. I looked over every detail of each individual project that had, to that day, been approved. I saw two common themes. One, they all had a marketable idea that had a strong following, and two, they were all presented very, very well. I started working on every scrap of an idea that I could come up with, anything that I though had the slightest chance of becoming a set. Most of the time I would think of something brilliant, but then I would go to see if someone had beaten me to the punch and find that my idea had already been attempted. My break through came in my Pre-Calculus math class one day as I was playing on my graphing calculator. I had recently installed a compatible version of Pac-Man to my calculator, so that when I was done with my work, and the teacher wasn't watching (hehe), I had something to keep me occupied. I was playing and at the same time thinking "What is a good idea for a set? OF COURSE! Everyone loves Pac-Man!" After that I went home and began to design a CAD version of a Pac-Man figure followed by a Ghost, and some of the more common fruits in the game. And thus the Pac-Man project began.

I wanted to capture as many of the original aspects of the game as possible when making the set. My hardest challenge was whether or not to give Pac-Man eyes. I decided that I should give the final design eyes, because I felt it added to the playability factor. I made many models of Pac-Man and the Ghosts and in the end I stuck with two. I have the detailed version of the characters and beside that I have the microscale (pictures are available above). Due to piece limitation I was only able to build a Blue and Red model, but I would very much like to construct a Pink and Orange model in the future. I also have a white Lego brick on a stand that represents one of the Dots from the game. Lastly I wanted to add in some of the items. My models are of the most common items (the ones found in the earlier levels of the game): The Cherries and the Strawberry.

I Need Your Help

I could really use your help in supporting this project. You biggest help comes with a simple click of the support button on the project page. If you have the time to help me further it would mean a lot to me if you could share this project with others. Getting 10,000 supports isn't going to be easy, but the more people who know about the project the greater our chances are of making this set a reality. If there is anything that you wish to see added into the set please leave a comment bellow. Thank you all for your support.