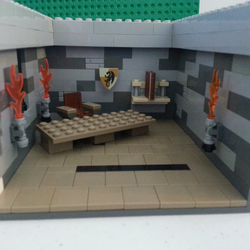 I am a great fan of the Medieval era. I am a member of a non-profit educational organization which focus' on the medieval period, and the majority of the Lego's I have in the home for myself and my little girls are Knight, Kingdom, & Castle themed. Since this is my interest and focus, I thought I would start with a Medieval Equestrian Masters Stable. I styled this after some images I have seen of small historically accurate training stables in Spain.

A Stable should be open, with big windows and high gables to allow light and air circulation. The back wall has 3 main windows, one for each stall. As well as several open arches along the top of the walls to facilitate a clean healthy environment for the highly valued animals in the trainers care.

An equestrian Master trainer of the Medieval era would not have a huge stable. He would instead have a few horses he works with before selling or giving them back to the owners. Usually nobles or higher rank members of society would partake of his skills. A Master trainer would work with Palfrey's, War mounts, and Ladies mounts. He would have started working with the horse quite young, giving it undivided attention and intensive training for anywhere from 6 months to 2 years.

The scene depicted is of a young Spanish war mount being "started" in hand by the trainer. The horse is in lounge harness and the trainer has a long line and a slim guide stick which would have been used to lightly touch the far side of the horses hips, giving it the ques needed. There is a young apprentice with a bucket and carrot, waiting for the Master to finish his work.

This Lego design incorporates a lift off roof, and fairly open front for ease of play.

The images you see are:

This versatile, compact but sturdy set could easily be modified to the Lego builders content, the only limit would be his/her imagination! Be sure to support and follow! I will be adding more projects about Medieval arts in the future!