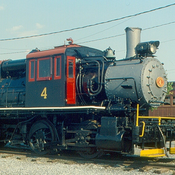 "Between 1924 and 1948 the Reading built nearly 300 eight-wheel cabooses to replace their previous generation of four-wheel cabooses. The new eight-wheel caboose design became known as the "Northeastern" caboose because the basic design was copied by numerous northeast railroads including the Lehigh Valley, Lehigh & New England, Jersey Central, Western Maryland and others. More than 600 Northeastern cabooses were produced in addition to those built by the Reading. All of the Reading cabooses were built in-house at the Reading car shop in Reading, PA.Reading caboose #92830 was the lead unit in a batch of 25 cabooses built in 1936. The batch of 25 was class NMj #92830 - #92854. NMj was the first class of Reading cabooses built on Duryea cushion underframes. The trucks have CNJ markings because they were built from a combination of new and used parts, some of which came from the CNJ. Caboose #92830 was retired around 1969. Reading Conductor Forrest Trittenbach, who worked the Perkiomen Branch, arranged for #92830 to be donated for display at a park in Emmaus. Unfortunately the caboose became a hangout for delinquents and proved to be a liability. The caboose was next acquired by Railways to Yesterday, but there was no room for it at Orbisonia. Railways to Yesterday never utilized the caboose and in September 1986 the caboose was moved from Penndel to Kempton. The caboose is somewhat unique in that it escaped modernization before being retired from the Reading. Many Reading cabooses were subjected to a variety of modernizations which may have included aluminum window frames, blanked over windows, cut-down ladders & roof walks, higher end rails, oil heaters and electric lights & markers. While these additions may have been practical, they made for an ugly caboose. As such, #92830 has been preserved in a more charming as-built condition."-Wanamaker Kempton And Southern Railroad's website about NMj caboose #92830, prototype for this model.