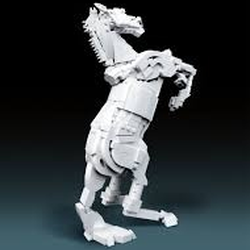 This model is a scene from the Percy Jackson and the Olympians series, book 1. Percy does not even know he is a demigod when he fights his demonic math teacher, Mrs. Dodds. The set includes three (3) minifigs - Percy, Mrs. Dodds, and a marble statue. the scene is made of a small section of the Greek/Roman gallery with walls decorated with snakes, helmets, and some statuettes. Percy wields his bronze sword and Mrs. Dodds holds a whip and wears bat wings.

We at Artsytechture hope to post (and one day have lego produce!) many Percy Jackson sets. Percy Jackson is (in our opinion) one of the greatest series of all time, and should definitely be produce as a set. Why, you ask? Because combining books and legos or other toys can really bring the stories to life, and give the readers a visual to match their favorite works of literature.