Indiana Jones and the Raiders of the Lost Ark: Jock's Biplane 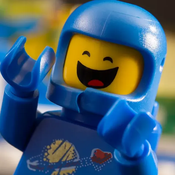 By TheSpectacularBrick
41 comments
"There's a big snake in the plane, Jock!"
There have been forty-one years of the whip-swinging, danger riding hero. He is a hero to some, enemy to others, and oftentimes the later acquaintances do not end so well!
"Oh, that's just my pet snake, Reggie."
This is a model of OB-CPO, that plane from Indiana Jones which Jock flew, luckily saving Indy from harm. This build is considerably larger than the set, and the 2008 version can actually fit under its wing! It has a realistic motor cover, leather seats, and pontoons.
"I hate snakes, Jock! I hate them!"