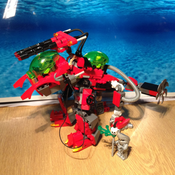 The age of humanity is over! Only a world of monsters and magic remains. The Albino Dragon is the most dangerous creator alive, this overbearing creature shares an alliance with the fellow evil spirits of goblins and skeletons, and it has a reign of tyranny that will span generations to come.

This model, I believe, is a nice change to the pre-moulded bodies of previous LEGO large reptiles, this might appeal to older people as there would be no pre-made large sections which, in my view, can be condescending, even though the results are awesome.

The Albino Dragon is a fully posable figure that can happily stand on its hind legs, with the aid of its tail, or on all fours. The front legs/arms are very articulated as they are made with ball joints, whereas the hind legs are made using 'click' hinges to allow more structural and rigid positions, but all feet are attached via ball joints, the toes/fingers are 'evil robot' arms in white with various claw sizes. The wings are made up of three sections all connected with a variety of ball joints and can be folded up like birds wings but can spread apart creating a bat-like wing-shape. The tail is constructed in a way similar to the hind legs as the body-tail joint uses a 'click' hinge but uses ball joints for the remaining connections. The head has a ball joint linking it to the neck, also the jaw opens a considerable amount, there are also nostrils which can have purple flames shooting out of them. Best of all features are the front hands as they are perfect for holding regular minifigures and miscellaneous items, eg, treasure chests, which only adds to the unbelievably large amount of playability this models offers. Also there is a saddle designed for both skeleton and normal figures, and the saddle can be easily taken off.

I believe this dragon would make a great set as it is a structurally sound model with loads of posability and playability, also I believe it has a universal audience, age-wise, as stories of dragons are universal and this model would be great as a display model. Because of the use of rigid joints the model is stable and I think it would need little modification as I often consider durability when creating new models.

Also this model would be part of an 'in-development' series of models called Myth Slayers, in which dystopian vehicles try to tranquillise the monsters found on other planets in order for the human to populate the universe after Earth was destroyed. Despite my background story for this model, it would be entirely up to you to decide the background story for this model, maybe it could be an addition to other ranges already done by LEGO, as I said, it's entirely up to you!

As a set, it would include:

I think this model is awesome, if you do too, please support my project, I hope you agree that fully built dragons need to be more common. Thank you for reading, and even more thanks if you supported!