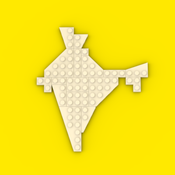 City
This is a model for the skyline of the city of Mumbai, previously known as Bombay. This build includes a collection of historical and modern buildings that complement the city's skyline, and few unique landmarks.
Bricks
This set is created with close to 2100 pieces, and includes hinges for a curved building.
Includes 4 printed tiles, used as movie posters on the billboards.
Buildings | Landmarks
Moving from right to left, this set has the following features:
1. Marine Drive - An arc shaped sea-side boulevard in South Mumbai, that has a collection of large boulders as its distinctive feature.
2. Gateway of India - A historical arch gateway on the seaside, built right next to the Taj Mahal Palace hotel.
3. Taj Mahal Palace Hotel and Tower - A heritage luxury hotel built on the seaside, over a century old.
4. Flora Fountain - An ornamental sculpted heritage fountain monument, built in 1864.
5. World Trade Center, Mumbai - One of the first business centers built in India.
6. Bombay Stock Exchange - The business center for the stock market in Mumbai.
7. Planet Godrej - One of the tallest residential towers in India.
8. The Imperial Towers - The tallest building in India.
#2 Why did I build it?
After building a few skyline sets from around the world, I was on a lookout for a set that represented a city in India. Unable to find one, I started building a set for Mumbai. This city gave enough variety in terms of buildings that could be included in the set, and I used a mix of historical and modern buildings (7 in total) to bring an engaging building experiences for LEGO fans.
#3 Why you believe this will make a great LEGO set.
This set will be the first skyline set from the Indian subcontinent, and will appeal to the people who've grown up calling the city their home, and the entire Indian population (and more) for whom this is the city of dreams. This will be a great set among the other LEGO skyline sets, and will complement the current Taj Mahal set, that has seen good demand in India.