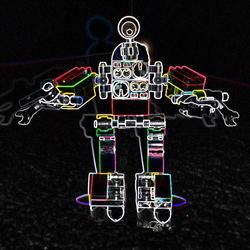 So, to celebrate the upcoming Lego Batman Movie, I give you the BAT-A-RAM that I'm proposing as a new Lego Ideas project.

Here is a little story of how the BAT-A-RAM came into action:

Captain Cold and his gang are holding up in their special Ice bunker after successful jewel heist. Captain Cold reinforced the wall with his Ice gun and Riddler added puzzles and traps to keep out the caped crusader.

Batman and Nightwing have tracked them to the hideout but Batman is feeling a little less like a puzzle solving detective and wants to take a more direct approach to the problem.

He shows Nightwing his new solution, the BAT-A-RAM, a modern battering ram!

It also separates into a “Rocket Sled” mode and the main wheeled body is still functional via voice control.

Batman and Nightwing, use the new BAT-A-RAM to take on the Ice Bunker and of course they win. They incapacitate the bad guys and save the day.

I hope you enjoy it and support it.