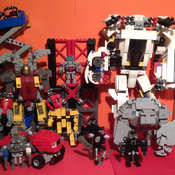 Wepons: Liberty prime has a rapid fire plasma laser that shoots 4 bolts per second and has an unlimited mini uranium bomb arinal.

Liberty prime is immune to all human "arms" and even heavy long range artillrary he is truly a force to be recon with. But he is not invincible an orbital missle strike can severely criple him