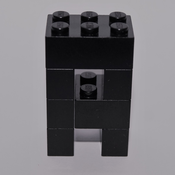 I welcome, I am describing the spaceship for you "Ranger" from the film "Interstellar".

The ship was made based on scenes from the planet Miller's.

He has 3 minifigurines and one robot:

The ship is of considerable sizes, he doesn't contain elements simple to infringe, everything is holding on while using.

This model wasn't simple to design, I had him no problems, he was of keel of times rebuilt so that he gets the best effect. I have stuff that my project will appeal to you:) I ask also for leaving the comment: D