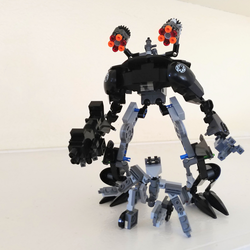 I created this robot because i love rpbots and sea life so i decided to join the two. I wanted it to have functional arms and hands that are unique from eachother in order to serve multiple fumctions. The hands can hold weapons or minifigs among other things. The tentacles have a full range of motion and allow the squid to stand on.its own. The squids face opens up lile a hatch and can house up to two minifigs.  The torso also rotate 360 degrees.

I think it would be a great lego set because it can be posed in many different ways which allows ypir imagination to really run wild. I also think thete can be a line of sea life robots that can be created to accompany this figure like an underwater robot army.