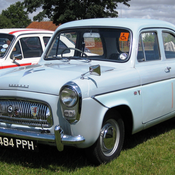 Claude Maximillian Overton Transpire Dibbler (or C.M.O.T Dibbler) is a character in the popular Discworld series by Terry Pratchett. He is an entrepreneur who is notorious for selling questionable sausages in questionable buns when business is bad. He has taken part in many other business adventures such as Music With Rocks In, Moving Pictures, and others. Rincewind, is an incapable wizard who's best skill is the art of escape. He is included in this set as well with the Luggage. The Luggage is a magical, bottomless travel accessory on hundreds of tiny pink legs given to Rincewind by a tourist named Twoflower. It is intensely protective and will protect its owner from anything, which has included sharks, demon kings, tribal sacrifice, and strange creatures from other dimensions with far to many limbs and tentacles.

Some liberties have been taken with the building of the cart itself as it is never properly described in the books. Because of this, the general feel of Dibbler is what the cart was based off of when it was designed. Complete with roasting rat, moldy sausage, flavour disguising condiments, and decaying canopy, the cart would be a fantastic play piece. Also, Dibbler comes with the ingredients that he uses to make his sausages. In the books it is made clear that no one knows exactly what they are made of, so you can use your imagination.

I've always been a huge fan of the Discworld books, and I wasn't quite sure how best to sum them up. I decided that Dibbler would give a vague impression of how things work in the books, so I decided to do my best with him.

This set has approximately 100 pieces, so it is not large, but it is still would be wonderful fun. It would be great to see this set make it to the review board!