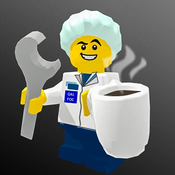 On December 15th, 2016, the Galileo European Satellite Navigation System officially started providing its signals and services to the general public.

In order to celebrate this important milestone for Europe, a 1:20 scale model of the Galileo FOC Spacecraft has been created.

The Galileo European Satellite Navigation System is mainly composed of Galileo FOC (Full Operational Capability) satellites, which are produced by OHB in Bremen, Germany, with their payloads provided by SSTL in Guildford, United Kingdom.

There are already 14 Galileo FOC satellites orbiting the Earth at an altitude of around 24.000 km. Eight more identical satellites are close to being completed and will be launched in 2017 and 2018.

The model can be built in two ways, with the Solar Arrays either stowed or deployed.

If built with the Solar Arrays deployed, the model has an impressive wingspan of 78 cm. The set comes with a dedicated display stand to showcase the deployed spacecraft and support the Solar Arrays against gravity. For those who would prefer a more compact model on their desks, the satellite can also be built in its launch configuration with the Solar Arrays stowed. For this, the set includes a satellite trolley, which is also a scale model of the trolleys used throughout the production and during the launch campaigns.