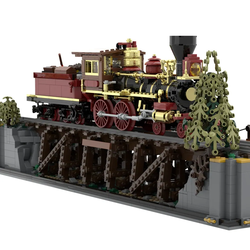 I found the inspiration for this build after doing much research about trains and the company, Norfolk Southern.  There are many companies, such as CSX, BNSF, Union Pacific and many more.  I have always been a huge fan of trains and had the base of the train done for a while.  I was going to take it apart when I realized that there was real potential for this.  After buying some pieces, since I have never had a LEGO train before, I was able to complete this build.

The build comes with tracks, a conductor and an engineer.  The train has working and turning wheels, a removable top for easy access to place the engineer and conductor in the train.  It works on the tracks as shown in the pictures above.  This was really fun to build with a few challenges that I was able to work out.  Maybe in the future I will find room to put my power functions in it.  I hope you find this build as cool as I find it.  Support and share!!  Also the steam train in the last picture is a past build and will go with it.  Go check it out.