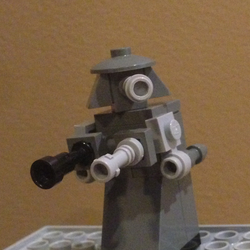 By The Cult Of Skaro
10 comments

During the beginning of Star Wars Episode 5 (or 2, if you ignore the prequels), you can see the Empire sending forces to the rebel base on the frozen planet Hoth. As seen during the invasion, this set has an At-St stomping around with an interior with room for a pilot and other troops. In order to fight back the attacking troops, the rebels resort to their turrets to defend the Echo Base from the Dark side. This set comes with one rebel soldier, two snow troopers, and an At-St pilot.

This set would make an excellent addition to any star wars or lego fan's collection. It comes with an articulated At-St vehicle accurate to the movies, a turret set piece, and several minifigures to add to the realism of the scene. This set is perfect for die-hard fans of the franchise, or to young padawans who begin their fan base of the series.

*Note: Minifigures are not final, but represent their final products

By The Cult Of Skaro
10 comments