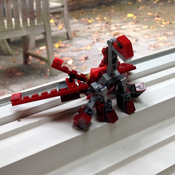 Qwertyuiop (Qwerty for short) is a small, special droid designed specifically for helping out. Rotor blades mounted on its head keep the small droid aloft and allow it to fly around like a helicopter. The poseable arm can move at two joints and the claw can rotate. Holding Qwerty in the air, the simple display stand is made of clear technic bars.

Qwerty's large eyes and friendly appearance puts owners at ease. It's not like something so small could take over the world? Right... ?

Qwerty's head is made up of six panels all attaching to one central rectangle made of brackets. Using 2 by 4 plates as spacers, the head is constructed into a rectangular box, then curved slopes give the head a round appearance.

The flash drive can be inserted into the port on the back of Qwerty's head, and it will slide in and out while being firm enough to not fall out on it's own.