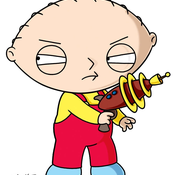 Hi guys! I'm here to share a creation I built while designing a new set, and though I know Star Wars sets that have nothing to do with the Force Awakens are pretty old, I needed to share it because I think it looks cool. Starting off, we have a good defence from two small gates on either side that can be turned up, and also two heavy armour plates below it. We also have a swivelling turret with a cannon, that can fit a minifigure when the hatch is opened. This turret is half of the one from Lego Star Wars set 7749,and also features two flick fire missiles that can be triggered from the back. 3 wheels on each side gives the total of 6 wheels to move this powerful vehicle. Most importantly, we have a large hatch in the middle that can be lifted all the way up to reveal controls and a seat for a Lego minifigure to drive the tank. For the minifigures, I included three regular stormtroopers, A stormtrooper commander with modified breastplate, and an AT-AT pilot to drive this tank (Weird, I know)

If you like this idea and want it in stores, please support it and follow me! Any help is GREATLY appreciated. Thank You!