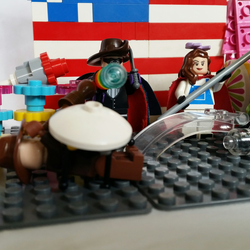 This is a superhero themed set that I hope everyone will like. The characters that come are Candy Crusher, Color Code and Glass Man and The Cloud bug Factory and of the Cloud Bug. This will feature 6 background stories to help get the idea why there was a factory and how these superheroes and villain came about. This will include 3 weapons for each character to fight with. This idea is also for boys and girls not just one or the other. My morale for this set is that people are not necessarily nice if they wore bright colors. Also if people wore dark colors that does not always mean there angry.

Here are some brief summaries of my background stories.

Color Code's real name is Chris Collins. His Father died after falling of a tight rope from the circus. He now lives with is Aunt Claire Collins and now has a brother named Carl Collins. How they both got there powers was from a 150 degree heat wave.

Candy Crusher's real name is Caitlin Clark. She is Carl Collins assistant for The Cloud Bug Factory. She really is Color Code's sidekick in evil and fatal situations. He got her powers from one Color Code's Cloud Bugs herself.

Glass Man's Actual name is Jason Gilmore. Who works for the new P.A.R.A.H.U.M.A.N. agency. Jason Gilmore's family was very rich because of his dad Jason Gilmore. Sadly Jason was very mean to his son for very bad reasons. His Mother Clarissa Gilmore called "The Police". Apparently Candy Crusher was fake Police Officer who killed Mason's Mother. Mason ran through his house window trying to escape. He got his powers from a Cloud Bug that bit him when shards glass was in him.

I hope everyone has enjoyed what they have read and thank you for your time.