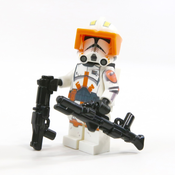 This is my very own transporter. It is fragile for display and it can be used for playing. I spent about 1 day working on it. It has roughly about 650 pieces. I may be wrong. It has some functions including a back door drop down. The the stud shooters (not the 6 stud shooter) at the top will be clear. It can act as a light when it is dark. The windshield piece might not be made in Legos but I found it in my Lego box. Some of the pieces might be changed into a more dark colors but I didn't have that color in piece. I think it could be a great lego set because it has some functions lego has created. May the Force be with you! Always!