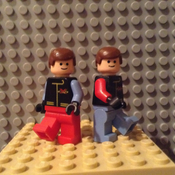 By Jake and Zach Riedel
34 comments

Air Chevron is an airline company I made up.

I built a concept model using parts from set 3182. However, the concept drawing was orange and light blue. Since Lego didn't have any of the required parts in the necessary colors, I used Lego Digital Designer instead. When rendering, I had a lot of difficulties, and I could only get one photo rendered successfully.

There are flip up doors at the back of the aircraft. They function similar to the doors on sets 60022, 7734, and 7723. The landing gear (not shown) can be any style Lego has done with these style planes. The reason I want this to become a set is because Lego City needs more planes in less white and more of a different color to stand out. Orange and light blue are shown here, but I'll let Lego consider what ever kind of colors they want to use.

By Jake and Zach Riedel
34 comments