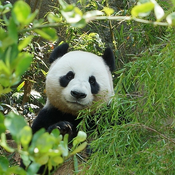 Colony SHip Alpha is Man's first foray into deep-space, in search of new habitable worlds. A species without a backup planet is always at risk of obliteration from an extinction-level event.

This 24-kilometer long ship is rendered in Lego on a 1/100,000 scale, hence it measures a mere 24 centimeters. This micro-scale colossus comprises of 2 main ecosystems, the first habitat bubble contains the colony's industrial complex, whilst the second habitat bubble contains the agricultural facilities to feed the entire ship on its multi-decade long journey to the stars. Seeing as how the nearest habitable star system is many light years away, the Colony Ship's journey will have to span several human generations on board.

Finally, 4 extensions poke out from the ring section between both habitat bubbles. The wealthier populace resides in the most distal ends of the extensions, thus they get to enjoy more Earth-like gravity, while the general population lives closer to the rotational axis of the ship, with consequently less gravity. Even in space, the formation of a social hierarchy is apparent.