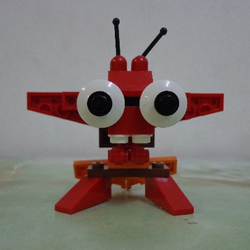 Presenting the Harrier-Class Titanium Starship,a 663-piece set idea.It is based on a story about a team of humans who are on a mission to find Amythstone, a crystal used to power colonies on planets and moons.This team is called the Titanium Command Squad.However, there are space pirates who want to steal the Amythstone for their own evil purposes.

The set consists of a large Titanium Harrier-Class starship and a pirate spacecraft.The Titanium Command ship has a removable roof with spring-loaded missiles and the sides open to reveal the interior. The interior's front has a cockpit section,and behind that a large screen to display information about their location.In the middle there are accessory holders and the supports for the sides of the craft.At the back there is a crystal examination station,an interrogation seat for captured pirates,a holographic projector and some storage boxes.(Some interior details were inspired by set 75055.)The ship also features retractable landing gear.

The pirate craft features folding wings,a removable cockpit canopy and flick-fire missiles.The cargo section can detach from the rest of the ship and can open to access the cargo (which contains stolen crystals!).

If you have any suggestions for improvements,please let me know,as feedback is always appreciated.