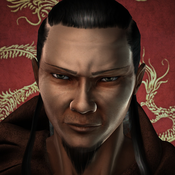 By Tuskano
2 comments
This is my first ship I built on LDD from the MMO of EVE Online. I give you, the Reaper. Basically the rookie ship, or noobie ship of the Minmatar race that you are given as you are taught the rules of space. After one of the later patches of the game however, this ship (along with the 3 other race's rookie ships) were given a complete redesign in their looks. I don't think this ship though can be found ingame anymore (tried a mission that had it before and it was changed), but many veteran players still find that flying these noobships can be fun and challenging.

A description from the EVE Online wiki,

"The Reaper is the one of the most basic ships and oldest ships for the Minmatar. Often called a rookie ship due to enjoyment for lack of complexity makes it amazing simple for thought processes for even the freshest of pod pilots to familiarize themselves with the concept of starship piloting. Its cheap construction, crewless requirement, modest utility, and old technology makes it freely available."

What got me to start building this? It started when I first started playing EVE Online about a year and a half ago. Alongside the Vigil, another cool frigate, the Reaper was a fun little ship.

As a past time when I was unable to play the game during my 2010 deployment (Navy guy here) so I started building on Lego Digital Designer and ended up building just the engines. I had plans to build a ship that would rival the UCS Millenium Falcon.

I also started on a technic looking frame of the starboard half of the ship and a simple build to the other half. After that, the project fell to the dark depths of my PC never to be touched again until Czar brought out the Rifter. Seeing that, I felt I needed to continue the project.


More on that can be found here on my MOCpage in more detail ...and on my Flickr page with more pictures.

So, on to some pictures! 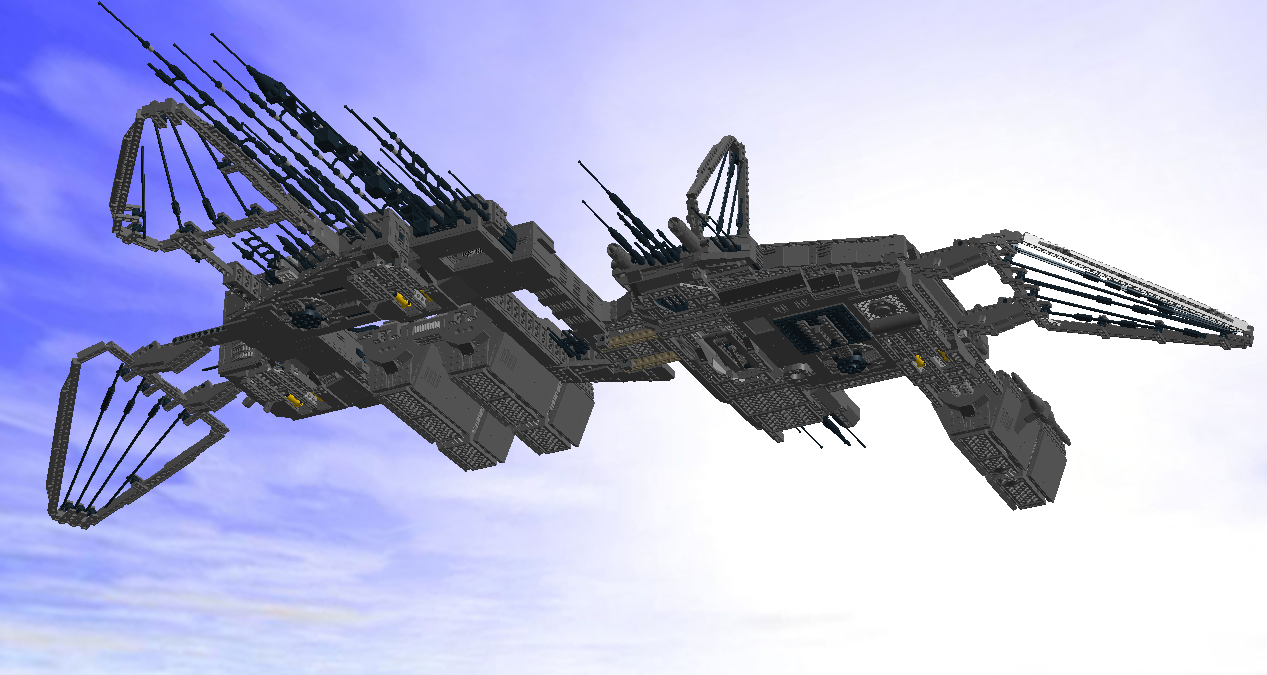 During the build, I wanted the Reaper to have it all. Be as most detailed as possible while still be playable and structurally sound. It is still a WIP however... as I want to build a cockpit that can fit a capsule like it would within the game. Right now it has a cockpit like any other normal human ship would that is filled with controls.

Another idea I had was to have retractible landing gear and wings. A further step was to connect all those by gears so the landing gear will retract at the same time the wings will fold with a simple press of a button or turn of a knob. That idea never got off, but may someday in the future. The landing gear does have suspension, so that's cool. 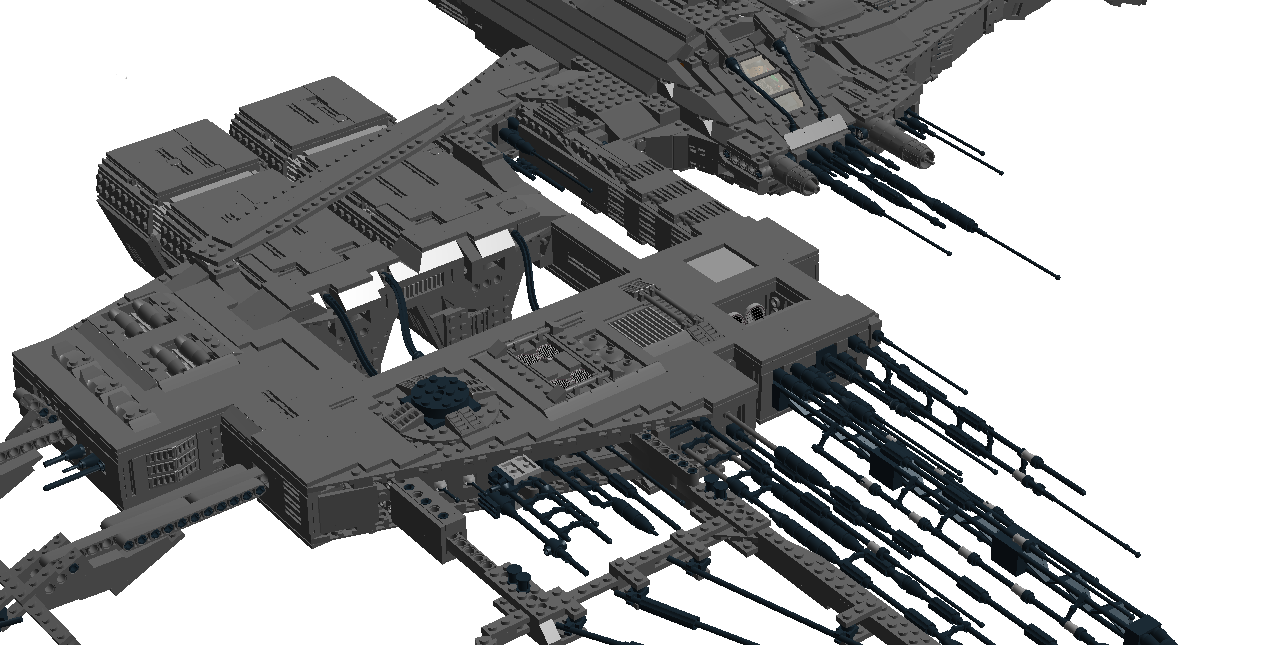 Here you can see all the detail of the starboard side, along with most of it being studless. After past builds, I wanted my next one to be faily studless. Something I never tried before.

There were some slow points during the build, like the middle and making it strong. I feal it should do the job now... I used some backwards designs under all that dark grey to make it not as weak. 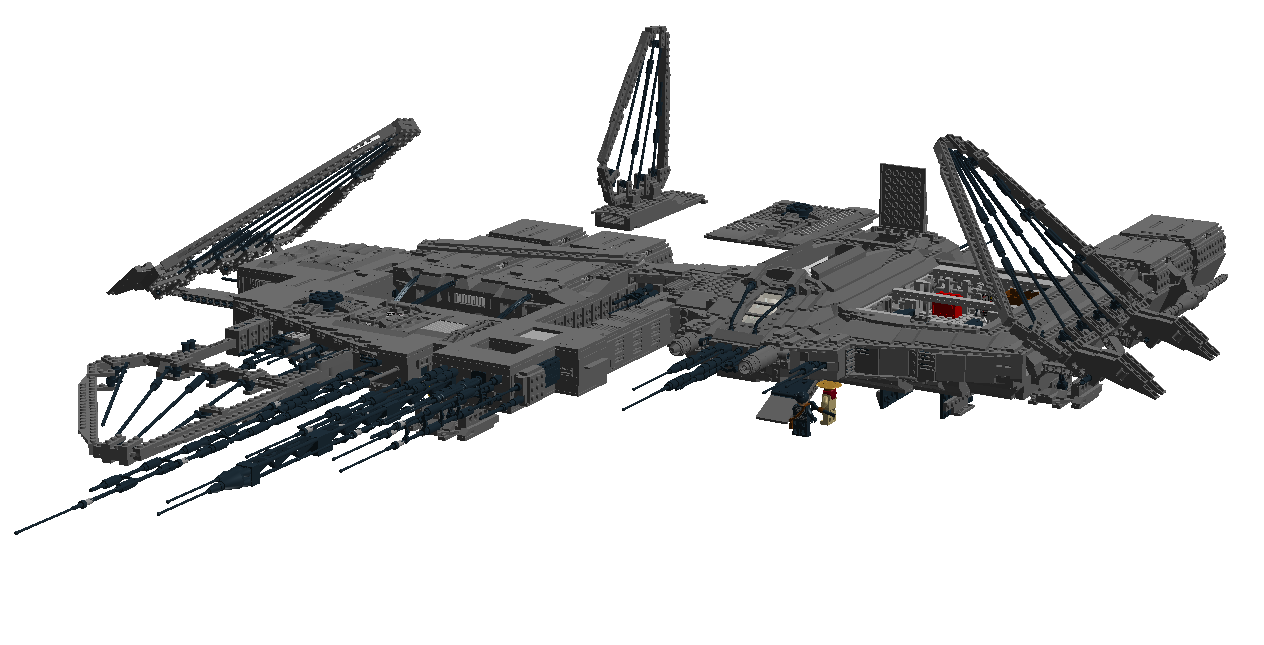 One of the cool things I love about it is that it has a detailed interior. Since there is no way to see the inside of the ships, I went with the power of imagination. It has the cockpit, a lounge/main room, the pilot's cabin, and the cargohold.

The cargohold looks a bit bigger then from the game, but lets say it just has a cargo extender. It has a dual door setup... only prolbem is there is no elevator or ramp from the bay. So I went with a packable speeder that has a flatbed on the back to carry the cargo in and out.

There is also a small secondary cargobay on the starboard half that is about 8x8 studs long and is 3 bricks tall. Was thinking it could be the drone bay, but might be too small for the job. Can't think of anywhere else for one at the momment... the ship is able to hold one small scout drone that is 7 meters long. But only idea I have is one that would litterally pack up into a box to fit in it.

Next is the main room that also doubles as the kitchen and as a lounge. The boarding ramp also enters through there and is hidden under the lounge table that can fold up when the boarding ramp lowers.

Last is the pilot's cabin in the back. It has a working dresser, a computer and other nice things... like a toilet/sink & mirror setup in the corner. It also has a door leading to a compartment underneith for those smuggler-type pilots that can fit a nice amount of stuff. 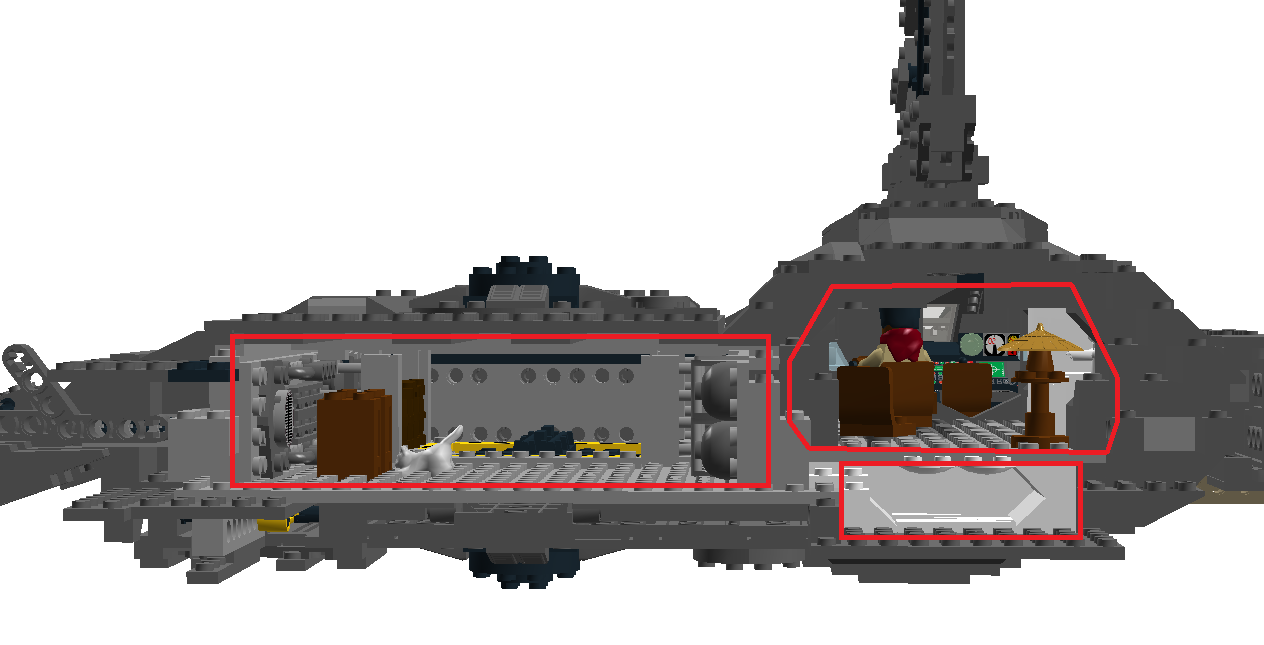 A teaser picture of the inside.


Hope you enjoyed the ship!