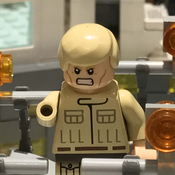 The first transport is AWAY!

The GR 75 meduim transport was used by the Rebel Alliance during the Galactic Civil War.A number of these ships served at the Battle of Scarif and they served as an escape craft to evacuate the rebels from the Assault on Hoth. The transport had a small bridge near the rear and had deflector shields.This micro-fighter has two spring loaded canons at the front which can be easily fired via the cockpit. The spacecraft can fit two min-figs in this neat compact design.

It may look like a strange white whale but 40 years on, looks retro cool…