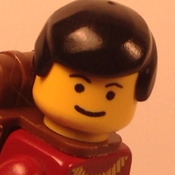 I recently submitted a Lego ideas project. Sadly, it was denied. So I thought I might take time to explain what it was.

We should all know who Erik Brok is. He was a wonderful AFOL in the community for many years, he also designed the Modular Makret Street Set. Sadly, sometime in late 2007 he passed away after battling with cancer. I wanted to honor him,  and tell his story so he wouldn't be forgotten in the Lego community. I "re-submitted" his set. It was most likely denied due to the fact that it was already existing set, but I would climb mountains to see that retired set come out and have Erik's story be told.

Hey Guys, thank you for all your support so far! I really appreciate it. Now, let's get right to it! I've submitted a new LEGO ideas project, and it's now awaiting approval. The set itself is for you to find out ;-)

So, keep an eye out for it!

Thas for all the support so far! I'm exited to announce that I'll be releasing a ROBINSON CRUESOE set onto Lego ideas! Soon!