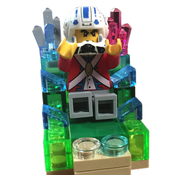 A rock 'em, sock 'em way to find out who's minifigure is the strongest! Put any two Lego minifigures to the test and then do battle by moving the hinged levers to make minifigures fight. The first minifigure to be knocked off the perch loses!

Minifigures can fight with or without weapons, and the Minifigure Battlefield even has a place to store swords, axes, and other weapons/tools for battle! There's even a spinner to decide which minifigure you and your opponent will control.