PushBackTruck in the airport ! 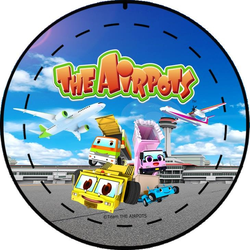 A PushbackTruck in the airport !

The special vehicle which functions at the airport was made. It's pushback truck. A car of the strong man who pulls a big airplane. I had my eye on the windshield and made it the character.
It's about speed a person walks actually, and an airplane is pulled and it's pushed.
The towbar connected to an airplane was also reproduced. The size is to the extent I get on hand. I think I'll also make the car which functions at the other airports now.