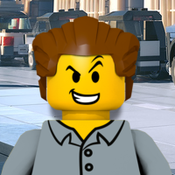 This Lego set is proposed in the collection of Lego Architecture, which generates small scale models of great landmarks of architecture.

In this case, we have tried to create a model of the famous ancient construction The Pharos of Alexandria, the famous Lighthouse.

The Pharos at Alexandria was the last structure to be named on Antipater of Sidon's list of the Seven Wonders of the Ancient World. It was constructed at the beginning of the 3rd century BC, begun by Ptolemy Soter, the ruler of the Egyptian region after the death of Alexander the Great in 323 BC. It was impressive in its construction and scale, and legends claim that its light (a reflective mirror) was visible in the harbor from 35 miles away.

The Lighthouse at Alexandria was designed by the Greek architect Sostratus of Cnidus. It was constructed of a light-colored stone that was reinforced with molten lead. This would have protected the walls from crashing ocean waves (this also helped it to become one of the longest-standing monuments of the list of wonders). It stood in three levels: a lower square level with a strong core to provide support, an octagon-shaped center level, and a circular level on top. At the peak of the lighthouse was a mirror that reflected the light of the sun at day, and a fire was lit each evening.

In the first century AD, the Pharos was believed to have become more than merely a navigational aid for sailing ships. Stories and legends claim that the lighthouse was used to set enemy ships ablaze in the harbor. Though many scholars refute this possibility due to technological limitations, recent experiments have shown that fires could have indeed been started using the reflective powers of the mirror and the sun (though probably not in as dramatic a fashion as reported by the ancients).

The Pharos at Alexandria stood and remained in use until 2 earthquakes, in 1303 and 1323, reduced it to rubble. In 1994, underwater archaeologists located some of the remains of the lighthouse in the Alexandrian Harbor, and more have recently been located using remote imaging. Some remains of the Pharos were also used in the construction of Fort Qaitbey in the 15th century, which stands on the very same spot to this day.