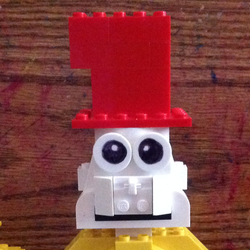 Green eggs and ham is a 1960 children's book written by Dr. Seuss. It's about Sam I Am trying to get his friend (also known as Guy Am I) to eat a Plate containing Green Eggs and Ham, while he refuses throughout the book he eventually tries it and likes it. Green Eggs and Ham is one of the most famous books ever created with over 8 million copies sold as of 2020!
As a fan of Dr. Seuss this set turned out better an I thought, I wanted a Lego Ideas set with bright colors and recognizable characters children and adults like. this set is designed to capture the likeness of our two protagonists, Sam being the bright eyed young character who is just trying to serve up some Green Eggs and Ham and Guy being the grumpy character who doesn't know what to do about Sam and the food.
this set includes:
Sam I Am
Guy Am I (at Table)
Green Eggs and Ham
the Original Book
Playable features include removable hats, book, and the plate of Green Eggs and Ham. The two characters have minor articulation with Sam being able to move his hands and you can reposition his head, same with Guy but he only has a movable unibrow that can go up, down, or sideways.
be like Sam, go support Green Eggs And Ham!
15
13
days left