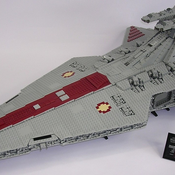 I first got this model idea from the First Order Battle Pack back in 2015, where a small turret came with the minifigures. I took the idea, combined it with some cosmetics from Republic at War (mod for Empire at War, an old game from 2007), and came out with this dual-barrel turbolaser. It has a swiveling battery that has a 45 degree angle joint that positions the barrels, and comes with many angular pieces on the base. At 54 pieces, this is meant to be included in a set with similar cosmetics, most likely a starfighter or a base assault. I built it for the specific reason of a prop or something to shoot down a fighter. Due to the lack of similar models and the quality of this one, I think it could make a great addition to a set.