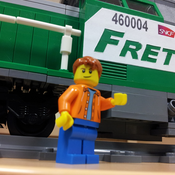 Bought by the French Railways (SNCF) in July 2004, the BB 60000 is a diesel locomotive with electric transmission derived from the 311.1 series of RENFE.(Spanish railway)
Delivered over several years by the manufacturer ( ALSTOM / VOSSLOH ), 155 green locomotive ride today for "FRET" ( transport goods ) and 20 yellow for "INFRASTRUCTURE" (Maintenance of the rail
network of France )

It is equipped with a Caterpillar engine V12 coupled to an alternator for supplying one electric traction motor on each axle .

Replacing of a growing old park of engines it is used today on the whole of the French territory.

Working in the railway field , I wanted to reproduce the BB 60000 as close as possible to reality.

First developed with LDD software, this engine measures a little less than 40cm long and 7cm wide and has 580 pieces.

Thank you for your support !!