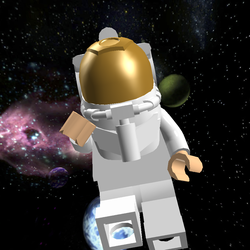 This is a plane. It is grey, white and transparent and it has no minifigures. The panels at the end of the wings move up and down. This is a model and is meant to be displayed but it can be used as a play set. The windows over the cabin open up. The plane has a white line going down the side of it as a decoration.

This would make a great set because of its size is not to big and not to small. It is a build that is slightly complex making it a good build for teenagers and adults. This could also be used as a play set for young children as they could pretend to fly it around.