BB-8 made with Lego Parts 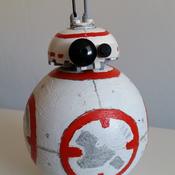 After watching the VII Episode of Star Wars: "The Force Awakens", my son and I really liked the new droid BB-8. My son has such a big collection of Lego Star Wars sets that could make feel envious an owner of a toy shop :-)

So, to cut the long story short, we were staring at the ball/planet that comes with the Series 3 Republic Assault Ship & Coruscant

Of course I had to buy another "planet", because my son would have never let me messing up his own private collection.

The other pieces you need for the head are shown in the picture.

This figure (12 cm tall) could be a perfect match for the new Lego Star Wars action figures (which measure around 18 cm of height).

It can also be used as a "Russian doll", to put a Lego set inside of it (as currently happens with the Planets series).

As you can see it can easily assembled, allowing young children to play with it.