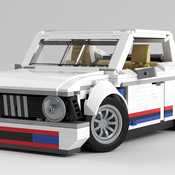 The Mazda Miata, this Mazda Miata is one of the moost famous and iconic cars ever made, mainly because it was cheap, small, fun and reliable. It only had around 110hp, but it was very light so it still would go pretty fast.

This would be a good Lego set, it is a famous car, like the Mini Cooper or the Caterham which are already being sold by Lego, and every person who likes cars (and Lego off course) would like to have one. Underneath it's build with Lego Creator cars techniques, plus some details to make it be instantly recognizable, like the pop-up headlights, for example.

It's packed with lots of working functions as well, in the car you might as well find oppening doors, trunk, and hood. And don't forget about the details inside, like the straight 4 engine or the detailed interior.

Thanks for stopping by, don't forget to Support this project, it might become a real Lego set!