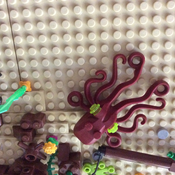 The 1937 John Deere Model B was like the Model A and the 1939 Model B that it’s wheel base is shaped a bit like a tricycle, hence the nickname people gave them; tricycle tractors. The 1937 JD Model B is uncommon as it was only released for two years before being replaced by the 1939 version.

This LEGO model was created in LDD because some of the parts don’t come in green. The model is designed to be very sturdy, but also to look accurate to the original tractor. The model has one flywheel either side and also has some engine detail. This model makes for a great display piece, and also a great toy for young children as it is quite sturdy.