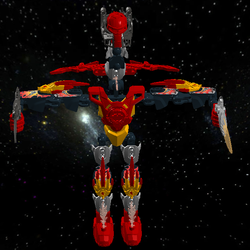 Its Lego Hero Factory creation of my own I used Lego Digital Designer and made a space background on it with pieces from Lego Bionicle and two weapons on both hands and made it with red, orange, black, finally put four fire tips on its feet, also on the legs and arms i put silver and fire armor on it as well as the red swords and the armor on its head, also it has a little tip of fire on its neck.  Why I build it was I wanted to make a new Hero Factory design and maybe let Hero Factory sets come back to lego and let kids be excited that Hero Factory is back in Lego and they can finally get new Hero Factory sets and build them and show them to there friends and family. Also I believe it would make a great lego set for kids and teenagers to build also it would make a great product to have maybe if your an adult to. So in conclusion i think this Lego set will be very popular and i think it would be good to approve this set into production.