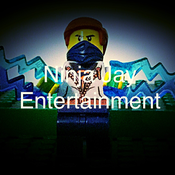 I have created this dojo topped mountin in honour of the first spinjitzu master and although nothing like it has ever appeared in the Ninjago TV show I thought it would be a great addition to any ninjago fan's collection. I have designed it to fit into the gap between season 2 and 3 of the TV show so that the minifigure selection fits with the time line. The model includes many small features and details to make it as Ninjago like as possible.

The dojo includes a stone staircase and an asian style gateway topped with a golden blade with a patterned wall across the front which is topped with crossbows at the corners. Inside there is a shrine to the first spinjitzu master with a conceled missile. To the left there are jump pads, spining swords and a punch bag. To the right there is a battle area for the ninja to test their skills against each other, there is also a table with training masks and a trophy for the victor.

You can then remove the dojo to reveal the cave underneath. In the cave there is a holding cell for the ninja's enemies, a work bench with a trophy cabinet for inventing competitions and a small buildable robot. Also included is a small maintenance trolly. There is also a kitchen with a cooker, ketchup and mustard dispenser, work top, cubbord, drawers, a sink and a shelf. You can also control the defences with the control area and take a break at the table. For extra detail there is a hidden compartment with maps, a safe, a chest with jems and a barrel to act as a bin.

The set includes approximately 1500 pieces and there are 9 minifigures.

I began building this to celebrate 5 years of Lego Ninjago.